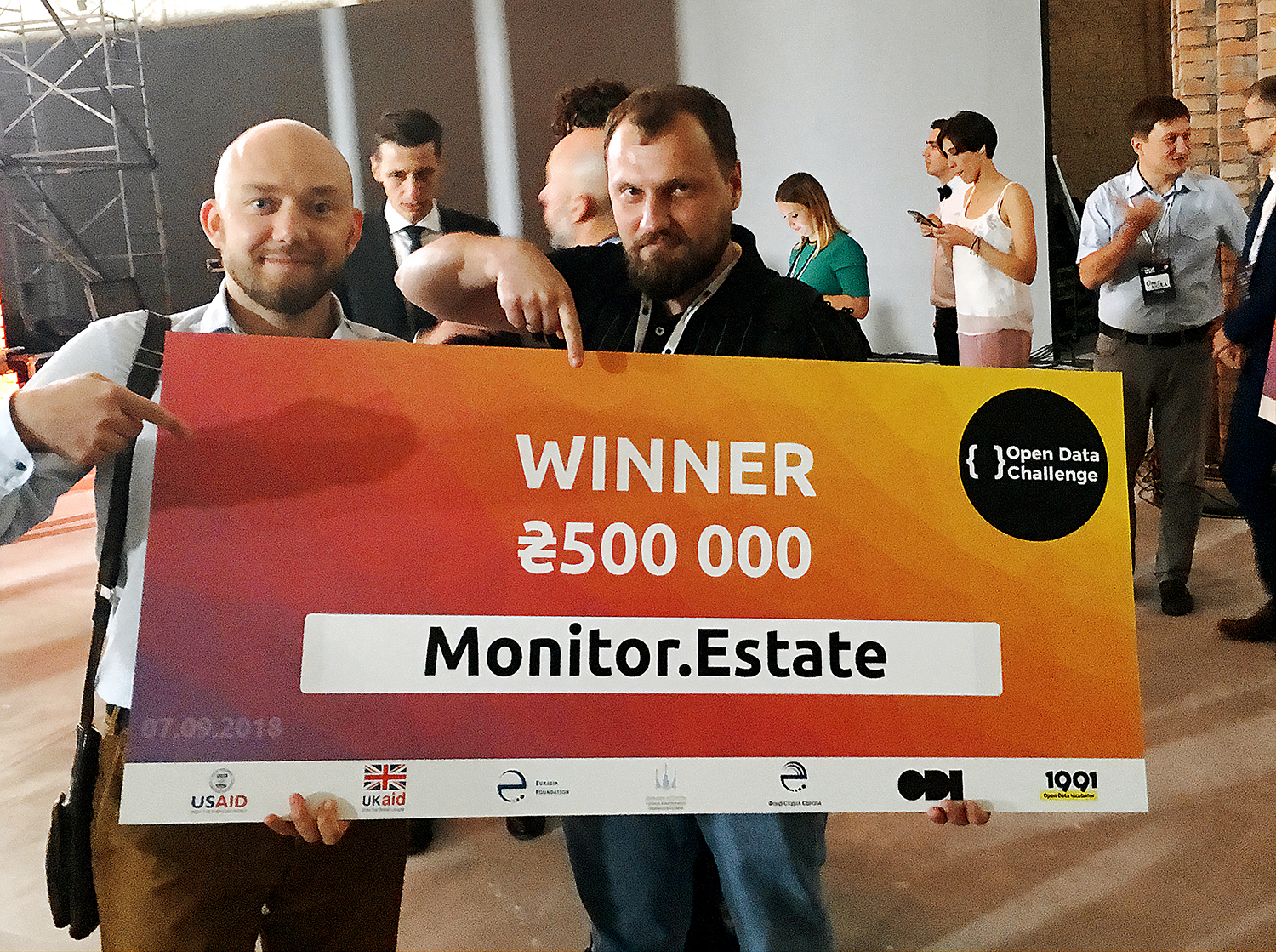 In recent years, the Ukrainian government has identified open data as being one of its key priorities for the country’s development. Since 2015, public officials have published thousands of data sets from central and local government agencies on the state open data portal. According to the findings of a study carried out by the Kyiv School of Economics and the Open Data Institute, open data accounted for $700 million (0.67%) of Ukraine’s GDP in 2017[1]. The authors of the study believe that if Ukraine continues on its path of publishing data in accordance with Cabinet of Ministers (CMU) Decree No. 835, the economic benefits will increase twofold to more than $1.4 billion (or 0.92%) of the country’s GDP by 2025. Open data relating to architecture and construction, business entities, court cases and other areas allows Ukrainians to access services that had previously been nonexistent or too costly and therefore inaccessible to the public at large. Moreover, the use of open data in the fight against corruption sheds light on government activities and makes pre-existing information much easier to analyze, process and combine, allowing for a new level of public scrutiny.

In 2017, in collaboration with 1991 Open Data Incubator and East Europe Foundation (EEF), Eurasia Foundation (EF) and the State Agency for e-Governance (now the Ministry of Digital Transformation of Ukraine, MDT) launched the annual Open Data Challenge (ODCh) competition with the support of the USAID/UK aid project, Transparency and Accountability in Public Administration and Services (TAPAS).

The aim of the ODCh is to tap into Ukraine’s open data and innovation potential by supporting products and services that utilize open data to combat corruption or generate business opportunities and societal benefits. 2020 was the fourth and final year of the ODCh and as usual, developers, entrepreneurs and activists were invited to participate. Between 2017 – 2020, the ODCh received 700 applications from teams eager to participate in the competition. Over the course of four years, 19 out of 54 finalists won the ODCh and collectively took home more than $380,000 in prize money to develop and expand their innovative services.

Monitor.Estate was one of the winners of the 2018 ODCh. The team took home $17,600 in prize money to further develop their service which enables users to verify that the information they receive from a developer for a new housing construction project is accurate and hasn’t been forged by consulting data available in government registers. For example, prospective home buyers can use the Monitor.Estate site to check the status of building permits, validity of contractor licenses, land management violations, any litigation that has been taken against construction project participants, and more.

One of Monitor.Estate’s founders is Volodymyr Kopot, a managing partner at KopotLawyers law firm with 17 years of experience as a lawyer.

Ukraine has its fair share of problems when it comes to construction projects – even condominiums that appear legitimate can turn out to be entangled in litigation or built on land that has officially been designated for other uses. Meanwhile, developers with a solid track record can suddenly go bankrupt.

It still surprises Kopot that in a country where families often spend their entire savings on an apartment (approximately $40,000-$50,000), many people are still reluctant to spend $200-$300 for legal services to vet a developer, verify building permits and have a purchase contract reviewed. When it comes to purchasing a new home, people make their decisions in a number of ways. Some may go by hearsay and reviews, while others consider factors such as price and location. Still others may investigate the developer only through media coverage.

Serhiy, who runs a major Ukrainian online media outlet, recalls that he selected his own apartment based on the developer’s reputation. He decided against investing in properties that were in the early stages of construction because although they are much cheaper than apartments in buildings that are already finished, the risk of the developer going bankrupt before the construction is completed tends to be high. In performing his due diligence, Serhiy noted that in one particular building, the vast majority of apartments were ‘operational’ or ready to move into (that is, agreements with the water supplier, electricity supplier, etc. were already in place). Though costly, he decided to move into one of these apartments because they were safer and more reliable compared to his other options.

Meanwhile, Tetiana, a communications manager, was simply unlucky: even though she chose a developer with an established market reputation, they went bankrupt just before her condominium was ready to move into.

Although the practice of verifying the legitimacy of housing projects was not common in Ukraine at that time, Kopot’s firm would frequently receive requests from clients asking them to run background checks on developers they had chosen or were considering. Kopot would spend up to four hours a day just to gather the paperwork for a particular construction project (e.g. information about the developer, contractors and permits). Analyzing the information would take an additional few hours. This is how Monitor.Estate, a service which analyzes data on the legal risks involved in the purchase and lease of real estate, was born.

Monitor.Estate: Quick and accessible to all

Kopot began working on Monitor.Estate in the summer of 2017, alongside his business partner and Chief Technology Officer, Aleksandr Radzishevskyi. The founders invested close to $2,000 of their own funds in the service, which was up and running by the time they joined the 2018 ODCh. Kopot doesn’t remember how he found out about the competition, but he and Radzishevskyi were selected to participate after just two attempts (their first attempt having been in 2017). After winning the competition in 2018 and claiming prize money of UAH 500,000 ($17,600), the team of two was able to finalize the functionality of the service and scale up the project from Kyiv to other regions and cities with large populations, namely Lviv, Odesa, Kharkiv, Dnipro and also Zhytomyr. The service allows users to conduct limited checks on new housing construction projects free of charge. For a more advanced, in-depth analysis, users are required to pay $90 per property.

Just two years ago, the Monitor.Estate website had 100 visitors per month. Today, it has 40 times that amount at 4,000 visitors per month. In addition to the service’s growing popularity, real estate background checks are becoming more and more common in Ukraine. The service has a blog and a Youtube channel that help users sift through the finer points of running a background check on a developer. The website also has a free directory with basic information about construction projects (for example, the developer, subcontractor(s), design engineers, building owner, and more) which can be easily found by entering the name of a specific property, or by choosing the name of a city which will then display the properties in the area and the information available on them. However, 65% of the website’s traffic comes from users conducting online checks of new housing construction projects based on data from the state registers.

“After seeing the full and transparent picture of a new housing construction project, the designated purpose of land, any liens or encumbrances, licenses of subcontractors, and litigation, many of our clients change their minds about a developer. This [the developer] often plays a major role when it comes to making a decision as to which property to invest in.” Volodymyr Kopot

Monitor.Estate is available for major cities in Ukraine including Kyiv, Lviv, Odessa, Kharkiv, and Dnipro, as well as the cities of Drohobych, Zhytomyr, and the new buildings in the Kyiv region.  Its new housing construction background check service is currently integrated with several major housing search services, such as DOM.RIA, that offer information about developers and provide legal services in this field. Monitor.Estate also collaborates with journalists free of charge, helping them to access data on problematic construction projects and conduct investigations that include ratings, useful tips, and common problems related to the development of new housing construction projects.

On January 11, 2021, the Monitor.Estate team released a new service which performs background checks on second-hand properties. It takes just 10 seconds and UAH 49 (approximately $1.50) to check the legal history of a secondary housing building which includes information such as its owner, the property type (residential or non-residential), involvement in lawsuits, and more. Within first two days of its launch, 150 of people used the service.

As a trend-setter in field of real estate legal audits, Monitor.Estate has witnessed the rise of a capable competitor like Dabibot that provides similar services. But Kopot isn’t afraid of a little competition. He welcomes the increased utilization of open data in the construction sector. According to Kopot and others, as these types of services gain traction and citizens’ awareness of them grow, more Ukrainians will keep their savings out of the hands of fraudulent developers, promoting fair competition and transparency in the construction market.